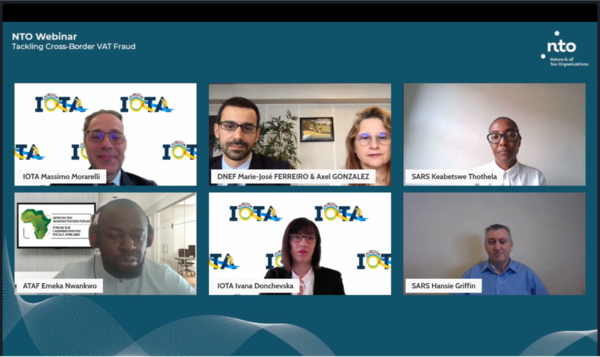 One of the primary disadvantages of the increasing interconnectedness of national economies is the growing opportunities to abuse cross-jurisdiction tax rules. Cross-border VAT fraud, in particular, is a source of growing concern for tax administrators and organisations around the world.

On 27 October 2022, the Network of Tax Organisations (NTO) hosted a webinar on “Tackling Cross-Border VAT Fraud”. Representatives from the General Directorate of Public Finance of France (DGFIP) and the South African Revenue Services (SARS) shared insights into tackling and preventing cross-Border VAT fraud through real-world examples. In addition, a representative from the African Tax Administration Forum (ATAF) provided further perspective on cross-border VAT fraud and how tax administrations can mitigate it. Over 200 participants attended the webinar. Mr. Massimo Morarelli, an International Expert from the Italian Revenue Agency and the Intra-European Organisation of Tax Administrations (IOTA), moderated the webinar.

The first speakers, Ms. Marie-José Ferreiro and Mr. Axel Gonzalez, from the DGFIP, presented the EUROFISC network’s mandate and its current undertaking regarding tackling cross-border VAT fraud within the European Union (EU). The EUROFISC network, per Ms. Marie-José Ferreiro, derives its mandate from the European Council Regulation Number 904/2010. The primary objective of the network centres on fostering cooperation among tax administration of EU member states and combatting VAT fraud. There are several avenues for collaboration within the EUROFISC network. Follow-up collaborative work that permits the direct exchange of information between tax administrations is one of the most significant forms of cooperation within the network. Mr. Gonzalez highlighted two examples of such actions involving several member states for the purpose of early detection – the Missing Trader Intra Community (MTIC) Fraud and VAT Margin Fraud. Although the follow-up actions demanded the exchange of documents and information to provide evidence against fraud, they have yielded substantial results. For example, since 2020, these actions resulted in 61 early VAT Registration Number (VRN) deregistration, 50 inquiries and audits, and the reporting of over 100 suspected fraudulent activities of French traders by the Dutch Tax Administration.

The second speakers, Mr. Hansie Griffin and Ms. Kebtetswe Thothela, from SARS, presented how their agency is combatting cross-border VAT fraud. Mr. Griffin commenced the presentation by highlighting the context of VAT fraud in South Africa. He mentioned that SARS has had to deal with VAT fraud since the institutionalisation of the VAT system in 1991. Ms. Thothela emphasised that VAT Carousel is the most common form of VAT fraud in the country by explaining the modus operandi of these schemes. She presented an example involving 11 vendors, with one vendor acting as the financier of the other. These vendors falsified various documents to claim VAT refunds. Unfortunately, the late detection of the scheme meant that a large portion of the false claims had been paid out. All in all, she signified that it is paramount for tax administrations to be vigilant of these schemes. Further, Mr. Griffin expanded on the South African experience by explaining how economic vendors in South Africa misrepresent the value of imported, high-value commodities to generate fictitious VAT claims. He noted that the biggest “pull” of these schemes has been the VAT refunds and how quickly these funds could be moved out of the tax jurisdiction of South Africa.

Mr. Emeka Nwankwo provided insights on cross-border VAT fraud from a regional tax organisation’s perspective. Mr. Nwankwo noted that the issue of cross-border VAT fraud is pertinent for Africa, given the increasing contribution of VAT to government revenue across the continent. Mr. Emeka stated that tax administrators should be wary of VAT fraud perpetuated via services. He encouraged tax administrators to be proactive and thoroughly apply the “know your customer” principle to mitigate the challenges in their jurisdiction. He advised that when such schemes are uncovered, it is important that the cases are prosecuted and made public to serve as examples. Mr. Nwankwo noted that taxpayer education, encouragement of voluntary compliance, clear guidance on due diligence, automation (for example, Invoice Matching in Kenya), and collaboration of responsible (domestic and external) agencies are some of the avenues that could be employed by tax administrations.

The NTO appreciates the contribution of all the speakers and participants and will look forward to welcoming all to further webinars. As a peer-learning platform that fosters experience sharing between and among different actors, the NTO will continue to spotlight contemporary tax administration challenges.