In one word, what do you consider the biggest challenge in fighting IFFs? 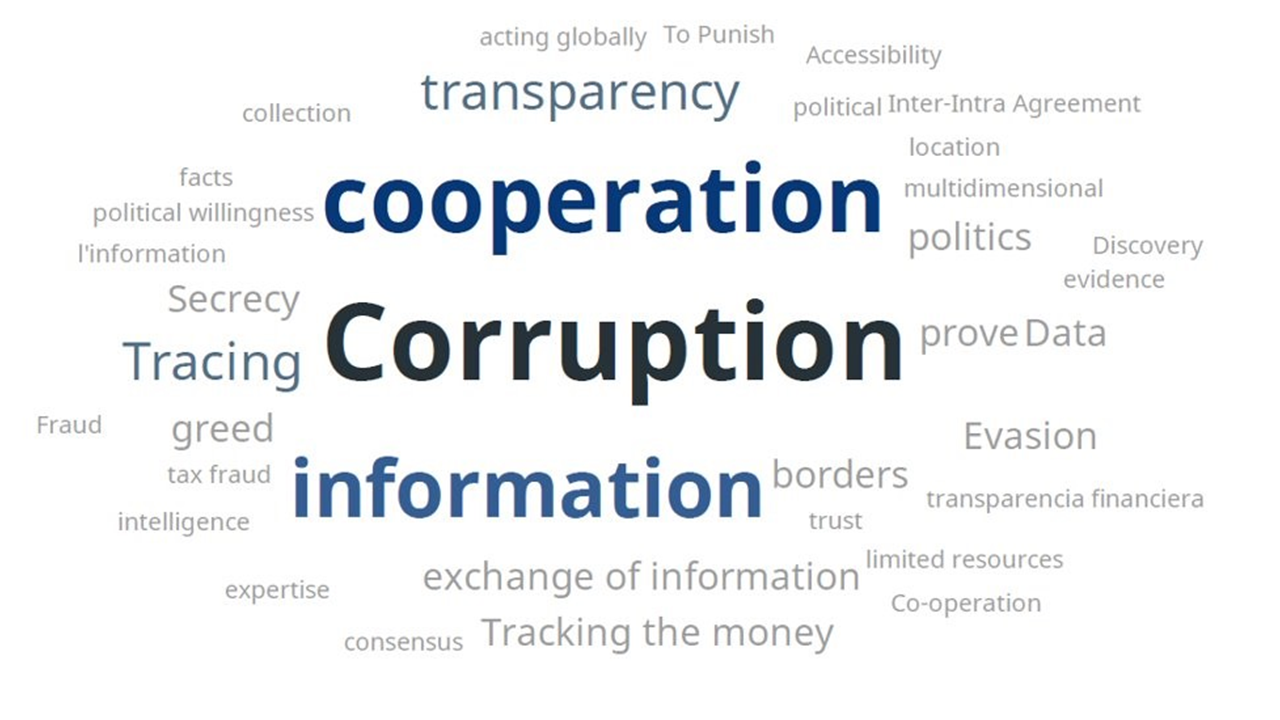 “Many tax-related Illicit Financial Flows can only be effectively tackled in a common effort”, Márcio Ferreira Verdi, Head of the NTO Council and Executive Secretary of the Inter-American Center of Tax Administrations (CIAT), underlined in his opening speech. “Revenue authorities, customs, financial crime units and other relevant agencies need to cooperate on both national as well as international level to be successful in this undertaking.”

Member tax administrations of the nine NTO regional and international tax organisations, international stakeholders and academia came together to exchange good practices to fight tax-related IFFs, build new and deepen existing partnerships among policy makers, tax administrators and other participants and learn from each other. “Learning from each other is very important, it is the only way that we can reduce the gap among our countries,” Verdi said.

High-level speakers representing the International Monetary Fund (IMF), the High-level Panel on International Financial Accountability and Integrity (FACTI panel) and the German Ministry of Economic Cooperation and Development (BMZ), who followed M. Verdi with their opening remarks, seem to have come to an aligning common conclusion: fostering consolidated global efforts is essential in the fight against IFFs.

“Illicit financial flows undermine our efforts to mobilize domestic revenues. Even worse, they also increase inequality – because wealthy individuals and corporations escape their obligations to society”, Dr. Maria Flachsbarth, the Parliamentary State Secretary to the BMZ, stated in her opening remarks. Thus, she addressed one central problem: tax avoidance, which has become a major concern in the battle of tax crime. Both tax evasion and avoidance must be tackled like any other type of tax offence.

Giving an overview of the current international developments and existing challenges was at the core of day one.

Prof. Attiya Waris, UN Independent Expert on Foreign Debt and Human Rights, explained in her keynote speech the critical need of disclosure of the income produced within an economy, which allows money to circulate in its domestic economy and governments to collect taxes: “IFFs have reduced the ability of a government to not only have money circulating in the economy, but actually to increase its own revenue. […] The most important challenge is not only to make sure that money is located – it is to make sure that the money is returned to its original economy”. Panelists followed by also addressing such challenges as porous country borders, weak organizational structures of tax authorities and the fact that tax administrations and law enforcement agencies keep on working in silos.

As a main takeaway from the opening panel, the attendees stressed the importance of sharing experiences, knowledge, information among tax agencies, administrations, and other relevant tax authorities. Furthermore, there was a high level of consensus on the necessity of local, regional, and international cooperation and collaboration: “We can only effectively fight IFFs with proper international cooperation [and] effective information exchange […]”, an attendee added. This gives rise to a whole-of-government approach, which includes not only collecting and sharing information, but more importantly the ability to examine, assess and interpret composed data (see figure 2: upper right corner). Furthermore, panelists highlighted capacity building in jurisdictions and, in particular, tax administrations as an important measure to fight tax frames and IFFs.

In the following sessions, participants addressed the role of beneficial ownership in combating tax crimes as well as effective responses from tax administrations to illegal activities:

Looking at the practice of implementation of a Beneficial Ownership (BO) register, participants came to the conclusion that an accurate BO register is necessary to combat IFFs efficiently and to ensure that every entity is contributing its share to the development of the country of residence of its owner. The main issue identified though, is the verification of BO data in such registers. It is necessary to have measures in place to ensure the reported data is correct and a sanction plan in place in case the opposite is revealed (e.g. restriction of business activities). 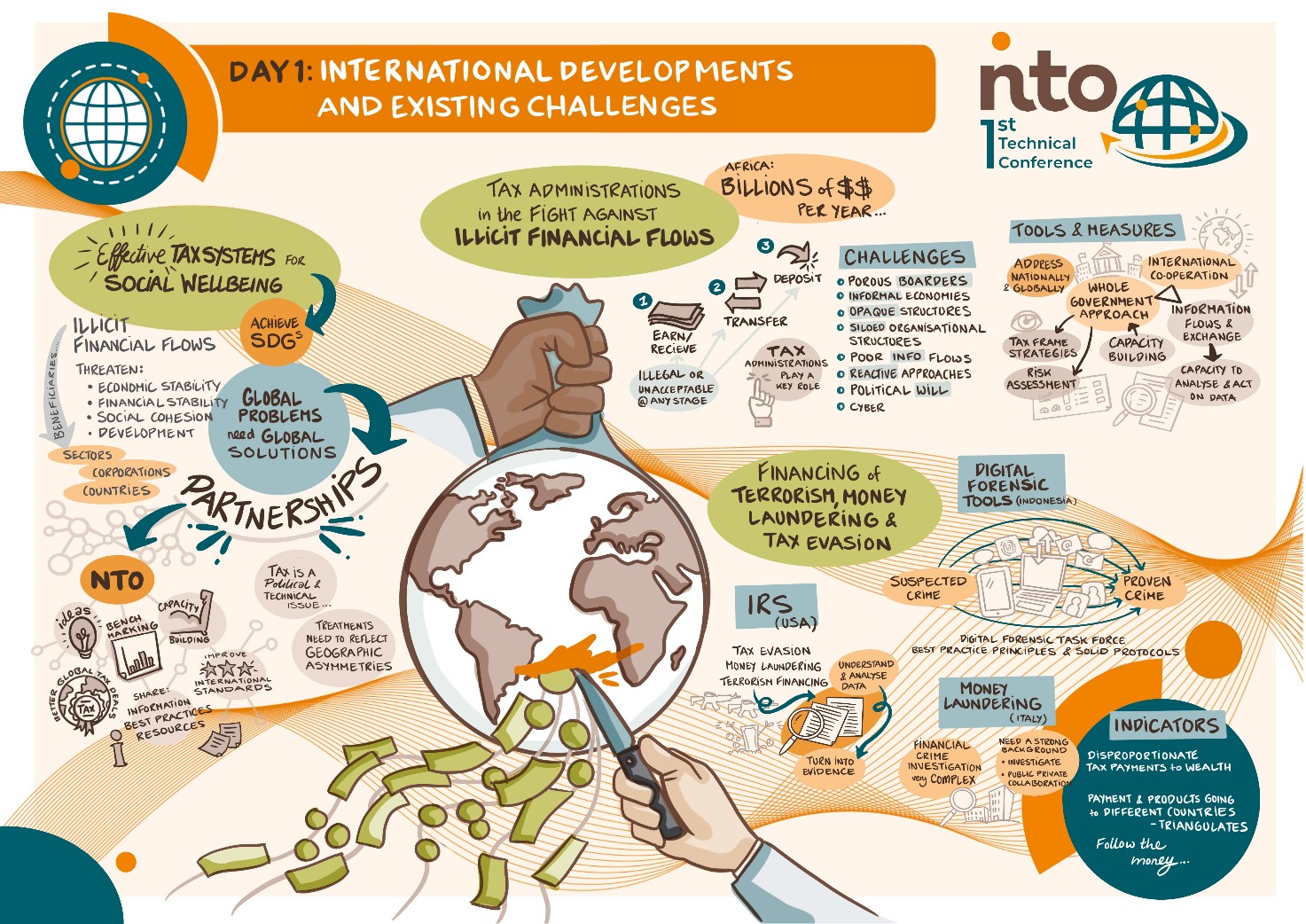 In the meantime, another group of experts was discussing how tax administrations can contribute to global security and at the same time foster sustainable growth of economies when combating threads such as financing terrorism, money laundering and tax evasion. “Tax administrations have a vital role to play in supporting law enforcement agencies by reporting cases of money laundering and providing evidence for further investigations”, Cleber Homem da Silva, Head of the Research and Investigation Office in Rio de Janeiro of the Brazilian Revenue Authority (RFB), explained. The Indonesian experience in implementing and conducting digital forensics, an investigation tool to identify criminal actions in the field of tax evasion was well received by the audience. Speakers also discussed other effective investigative tools, the importance of political will and the need to “follow the money flows”.

“International cooperation is a continuum”

In the course of the second day, the speakers debated on how to shape international cooperation and discussed current challenges that were introduced by the audience, such as secrecy, conflict of interest, communication and trust.

What is the first term that comes to your mind when you think about the challenges we face in international cooperation? 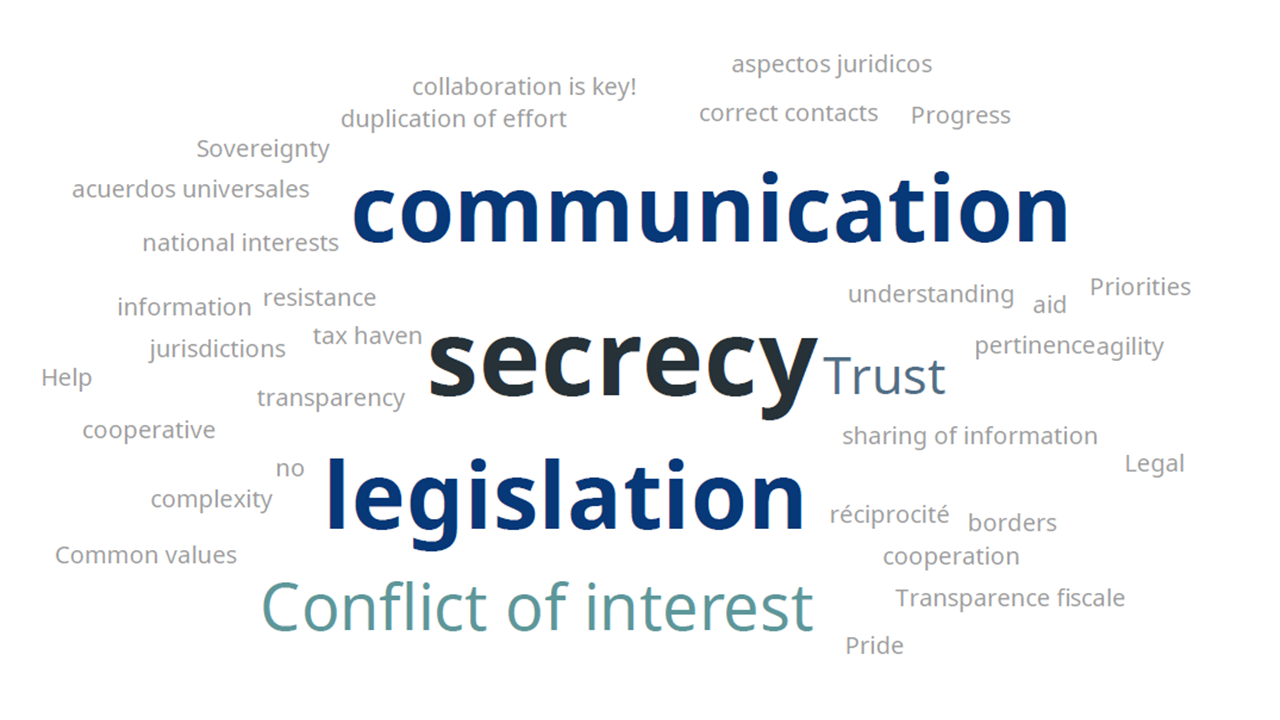 Figure 3: Participants' perception of current challenges in the realm of international cooperation

One of the main issues in the realm of international cooperation highlighted, is the creation of a common understanding of a particular country’s problem among all the stakeholders involved. In response to the question on how to enhance inter-institutional collaboration, the panellists agreed that it is crucial to support partners in establishing a strong infrastructure and (legal) frameworks between all partners and provide technical assistance in building capacity.

“The fact that the money is made most of the time in different jurisdiction and moved to another jurisdiction, only means that there must be cooperation for you to understand how the money is sourced, moved and used,”  the Director of the Inter-Governmental Action Group against Money Laundering in West Africa, Muazu Umar pointed out, while all agreed that knowledge sharing is also crucial to build transparency and trust.

During the first session of day two on “International cooperation: Cooperation between tax administrations”, the speakers focussed on challenges encountered by tax officials as well as key factors behind success stories in the realm of international cooperation between tax administrations. It became evident, that there are numerous hurdles reaching from constraints on information exchange to the lack of analytical tools. The Joint International Taskforce on Shared Intelligence and Collaboration (JITSIC) offers its members a platform to actively collaborate and share “actual intelligence” to tackle the risks that tax administrations face at an operational level.

The rest of the day was dedicated to discussing the usage of digital tools for tackling tax crime:

“Technology is an enabler, it is a constraint, and it is a possibility”

By executing a large-scale digitalization campaign, the Honduran tax administration was able to automize their processes. Hence, new web services were implemented, which allowed citizens to report complaints electronically, among others. As a result, it has led to an early detection of tax frauds. “Digital tools are essential to combat tax evasion and tax fraud. However, there should be a strong political will, capacity building and budgetary resources to invest”, an attendee commented, outlining the active role of the government in fostering the implementation and usage of digital tools. 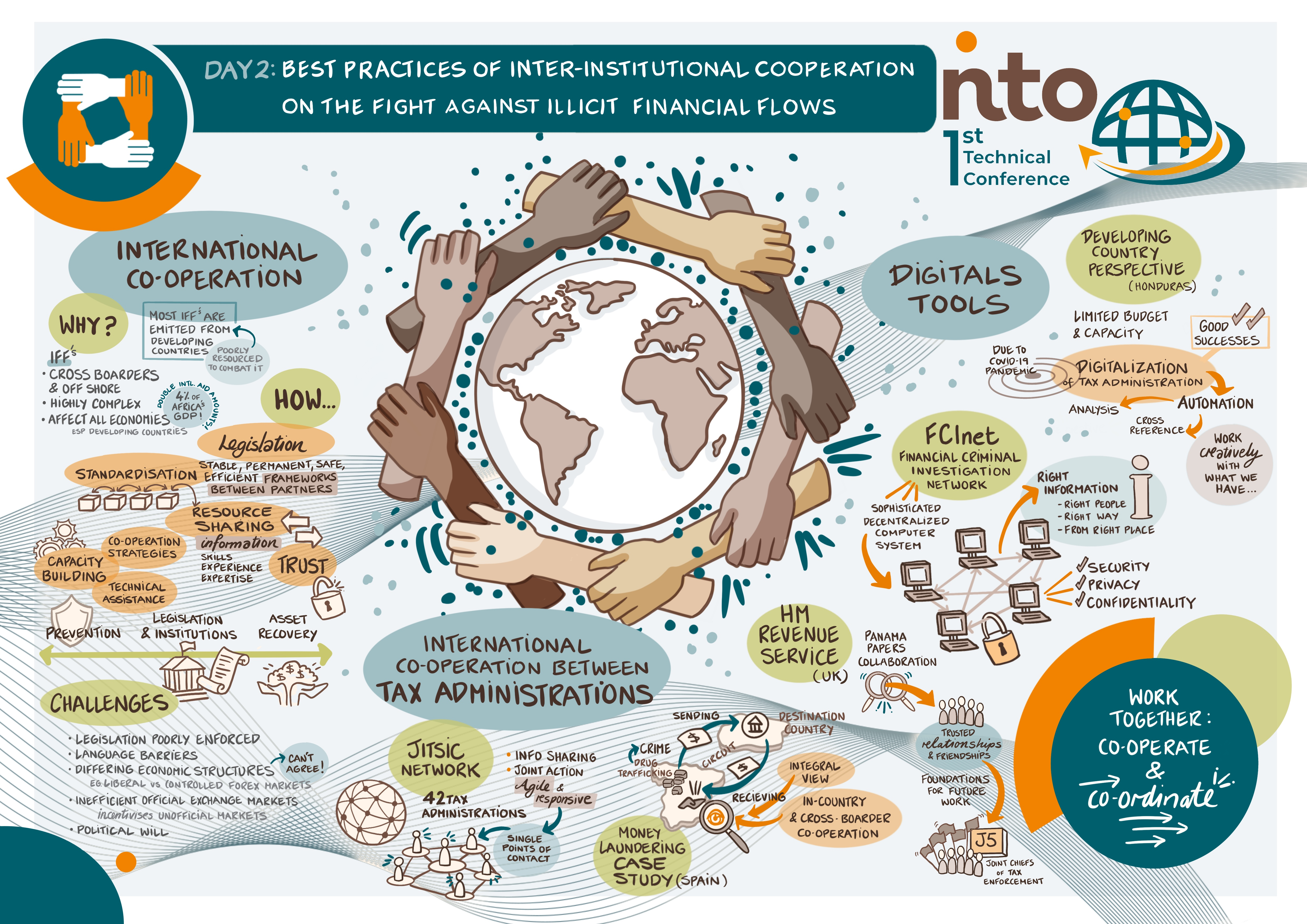 Figure 4: Graphic summary of day 2 on "Best Practices of Inter-Institutional Cooperation on the Fight Against IFFs"

On the third and last day participants were invited to review lessons learnt and discuss ways forward to continue the fight against financial crimes. During the opening panel, experts identified gaps and critical areas in current frameworks and instruments to target tax crime. While recapitulating the 10 Global Principles by the OECD, Marcos Roca, Tax and Crime Adviser at the OECD, acknowledged the establishment of joint task forces that have been collaborating to fight IFFs on a domestic level.

“Inter-agency cooperation is crucial”, Marcos Roca said. Furthermore, it accelerates the exchange of information that can be of further use for criminal investigation purposes, as seen in the example of Jennifer Bonocore, Head of Division for Strategic Coordination and Money Laundering/Financing of Terrorism, Public Revenues Federal Administration, Argentina: By implementing the Common Reporting Standard (CRS), jurisdictions oblige to exchange financial accounts information with other jurisdictions across country borders. Also, the Canadian Revenue Agency (CRA) relies on accurate data to investigate and prosecute tax crimes: Therefore, the CRA has invested heavily in executing data analysis, which is fed by publicly available and open-source information, as well as information exchanged among J5 partners. However, the experts figured lengthy procedures regarding the speed of information exchange on an international level: In order to successfully prosecute tax fraud, the panellists highlighted the need of an immediate exchange of data.

At the beginning of the second session Annet Oguttu, Professor in the Department of Taxation, University of Pretoria and panellist of the FACTI Panel, highlighted three tax related recommendations that were elaborated in the FACTI panel report. All 14 recommendations can be used as benchmarks for reforming the global architecture to foster financial integrity. The recommendation number three pleads for higher tax transparency “by having all private and multinational entities publish accounting and financial information on a country-by-country basis”. Furthermore, all taxpayers, in particular multinational corporations, should pay their fair share of taxes, including tax collections on digitally delivered services. Lastly, tax regulations must be created based on fair principles.

At the same time, Miroslav Palansky, Data Scientist at the Tax Justice Network, (TJN) provided a critical perspective on existing international tax initiatives and underlined the need of an intergovernmental body, such as the United Nations that endeavours to achieve real inclusiveness in executing global tax initiatives. Furthermore, he highlighted that the TJN seeks to cooperate with individual (regional) tax authorities.

During the closing session, panellists discussed the (future) role of the NTO and tax organisations in the fight against tax crimes and in strengthening international cooperation. Throughout the discussion, great value was attached to the NTO primarily for providing a platform for regional, national and global cooperation. According to Logan Wort, the Executive Secretary at the African Tax Administration Forum (ATAF), the NTO not only has been promoting training and capacity building efforts among its member organisations to develop competent tax authorities, it also has a leading role to play in facilitating exchange of information as well as strengthening administrative and IT capabilities.

“It’s time to celebrate - Let us share the knowledge gained and ideas developed during this conference within our organisations. Let us build and strengthen new and existing partnerships to fight IFFs […] in order to raise revenues to finance sustainable development”, Marcio F. Verdi concluded the 1st NTO Technical Conference. 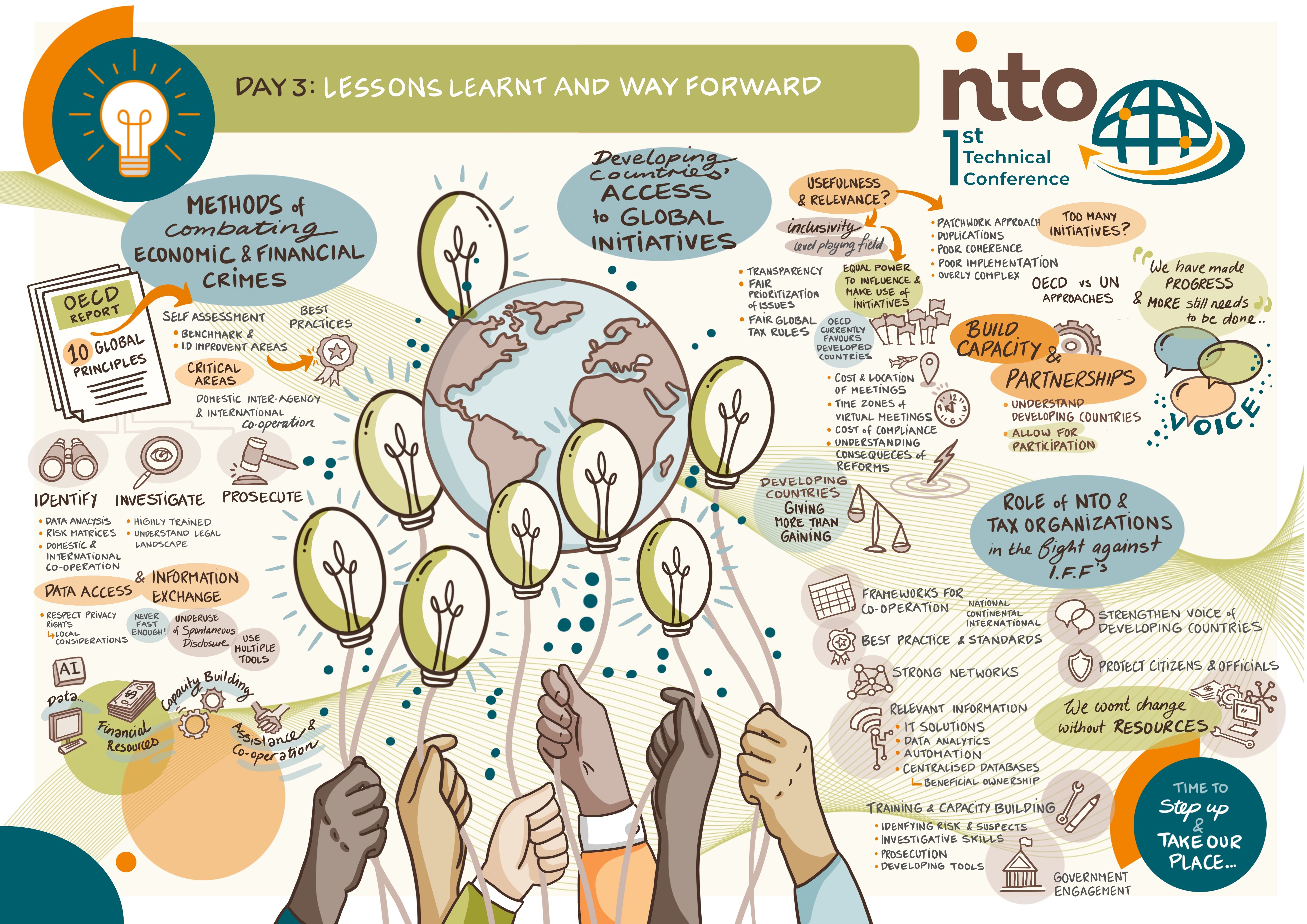 From 19 to 21 of October the Network of Tax Organisations (NTO) hosted its 1st Technical Conference under the theme “Building stronger partnerships to fight tax-related illicit financial flows”. Over the course of three days the conference gathered 518 attendees from 115 countries. The NTO invited them to not only exchange experiences and current best practices in the fight against tax crimes, but also to identify opportunities for growth and cooperation. Overall, 62 speakers took part in 12 interactive sessions.

About the Network of Tax Organisations (NTO)

Founded in May 2018 in Ottawa (Canada), the NTO brings together nine member organisations that represent over 180 countries worldwide. In order to foster capacity development and internal collaboration among its members, the NTO offers peer-learning activities and opportunities to exchange information and experiences. The NTO Secretariat is facilitated by the International Tax Compact (ITC) and financed by the German Federal Ministry for Economic Cooperation and Development.